Let me back up. Josh and I are both planners by nature. We love making plans and dreaming about the future. Our lives have structure and even our days off are often planned. When we go on vacation it’s different. On vacation we can’t control everything. On vacation we plan some, but we mostly plan to be spontaneous.

And you know what? God always meets us when we go out of town and works the details out and makes our trips awesome. It literally happens every time. We now joke about it. We look forward to it. This trip was no exception. We planned to take public bikes on a city trail Saturday, but couldn’t because all the bike racks near our hotel were empty. But we had learned about a nature preserve trail from a stranger we had just happened to sit next to at a restaurant the night before, so we checked that out instead. And it was so much better than what we originally planned! We were thrilled that the bikes were gone and our plans were wrecked.

This is just one small example, but our trips are chock full of examples like this. We discover unexpected and amazing places, we show up at great restaurants 15 minutes before they stop serving food, we decide to take a walk and sit on a pier just minutes before the moon rises on Lake Michigan. On this trip, we found bikes the next morning, when we weren’t planning a ride, and spontaneously went for it and had a great time. We couldn’t control those stupid bikes. But the timing was right – and it worked out better that way!

I realized on that bike ride, God doesn’t change. He’s not more present or more caring when we’re on vacation. It’s just the fact that we’ve squeezed him out of our lives at home by over-planning.

Maybe God wants us to be more spontaneous, less planned, and rely on him more than we already do.

So I asked God on that bike ride – what does this mean for us? What are you calling me to unravel? How can I embrace you and experience your goodness more at home the way I do on trips? Where is our plan conflicting with yours right now?

And it was almost too obvious.

I’ve mentioned my job on this blog a lot. I love it. It’s a great environment. It fits my personality. I have amazing coworkers. I’ve been there nearly 8 years. I started when I was in college and then I never left. I actually chose staying at this job over my freelance film career because it was less stressful and more reliable.

But we aren’t called to be comfortable.

You know where this is going….

As nice as the extra income is, as much as I enjoy my work, it is taking me away from my family on the nights and weekends. We struggle just to have time as a family, much less serve and volunteer as much as we would like. Rather than completely trusting God with our finances, Josh and I have carved out our own plan and we didn’t want to diverge from it. What if that’s what he was asking for? The plan was for me to stay at least another two years until we met certain financial goals. But what if God was saying that “someday” was actually now?

What if he was asking us for the one thing both of us wanted to hold onto? What if God had a better plan for our family? For our finances? For my free time?

Unwillingly and quite begrudgingly on that bike ride, Josh and I both admitted we were holding onto my job for the wrong reasons. We liked the security. We were afraid to let go. All the more reason we needed to. Even if God wasn’t calling me to quit, we at least needed to be willing to lay it down. Our unwillingness was the problem. I struggled to say it out loud. “What if God wants me to quit my job? I want to be obedient, but I don’t want to do it. I’m scared. I’m even scared to pray about it because I think it’s what he’ll ask me to do.”

We got back to the hotel, returned the bikes, and packed up to leave. We got in the car and we did pray about it. We surrendered our plans. We asked for his guidance over our lives, that we could learn to plan less, trust more, and be spontaneous.

We turned on a podcast from Giving Generously that Josh had downloaded for the trip home. On it a husband and wife talked about what they had given up for God’s kingdom. They gave of their time, resources, and influence. The woman worked for Microsoft and loved her job. She said God called her to quit the high-paying job she loved and instead use her skills to mentor others. It was so black and white Josh and I couldn’t deny it. “Is that it? Is that our answer?” We were both fairly certain that it was. Amazing how God meets us when we ask him, and answers us when we inquire of him. Josh had already downloaded that podcast before we ever went on the bike ride and asked the question….

I pondered it the whole 6 hours it took to drive home. It would hurt, but it would be the right thing. It’s easy to follow God’s call when it’s something we really want to do. It was fairly easy for us to move into St. Louis from the suburbs. We enthusiastically embraced the change. But this is hard because I don’t exactly know what’s next. (Why couldn’t God ask me to do something else spontaneous, like get a tattoo??)

I know I’ll spend more time with Josh and the boys. I know I’ll have more time to write and film things and host in my home. But everyone who knows me knows I’m not into being a typical stay at home mom. I know there’s no such thing as typical, and I’m extremely thankful to my mom for staying home with us, but I’ll always be a working woman to some extent because that’s who I am. The difference is now I’ll be working with no interest in getting paid. I’ll be volunteering, learning, mentoring, traveling, growing my gifts, and generally being open.

It requires faith because I’m not sure what the next adventure is, but I’m sure it will come. Faith that our finances will suffice. Faith that I won’t be bored, but find ways to serve and give of my time. Faith that this is the right thing and the right time. I think that it is. Often the one thing that we haven’t let go of yet is actually the one thing God wants from us.

So here we are. I’m quitting Trader Joe’s – the job I’ve had since college, the job I love dearly. This place has been my second home and my second family. It was the right thing for a long time. I’m thankful for what it did for me all these years. But I don’t want to get in the way if God has a bigger dream for my life and my time. I want to be willing, unafraid, fully-reliant on him, because when I trust him, I know amazing things happen.

And that’s how a simple bike ride changed our lives.

What are you withholding?
What are you afraid to give up?
What are you supposed to “quit” or “startup” that takes trust? I realize we aren’t all called to the same things. Sometimes simply staying the course is the hardest but most appropriate choice. 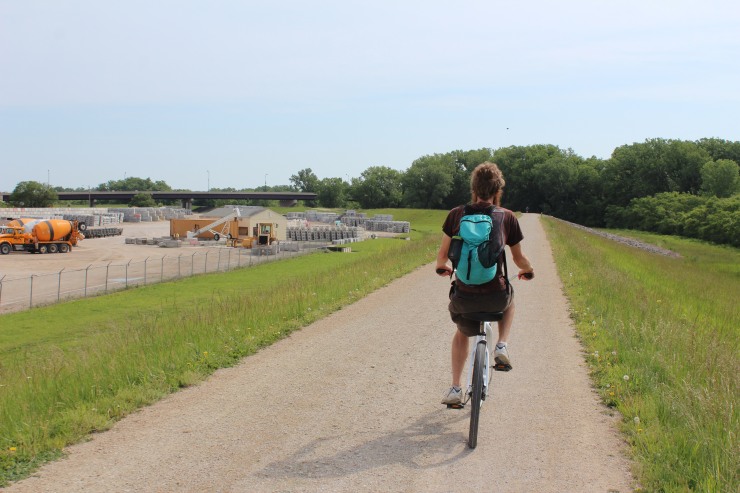